Story Behind the Wave Planter Texture

We all have our favorite Susan Aach pottery textures and glazes. This is the story of where it all began. Long before Susan ever imagined selling her work, she was learning the artistry and techniques many others would fall in love with. But her most successful texture came about as a happy accident… 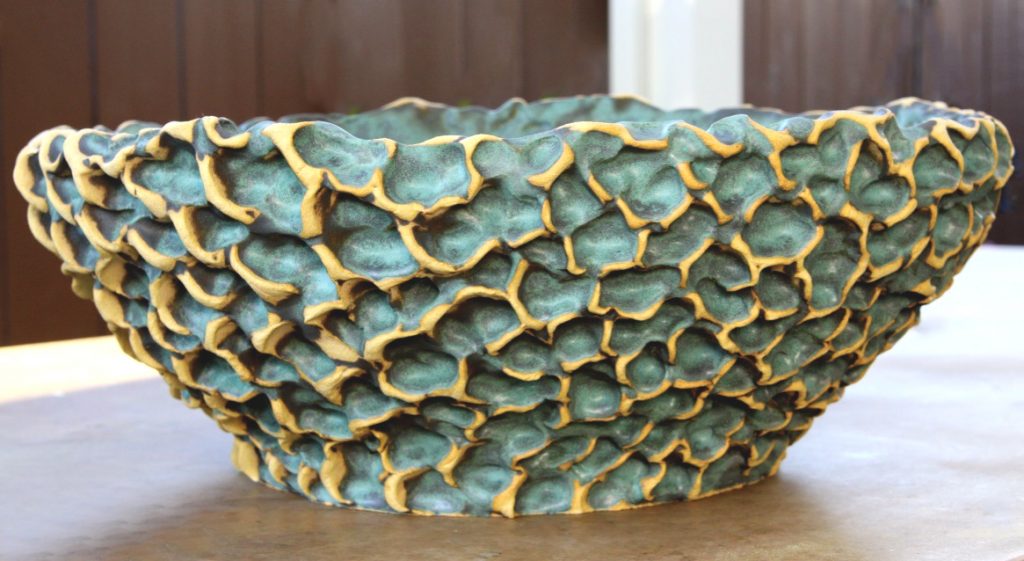 Susan has always enjoyed playing with texture and experimenting with smaller pieces. But she longed to try a really large piece, which is always a challenge to a ceramic artist. She began with a hand-formed pot made of large coils of groggy clay. She was pleased with the size and the general shape — but where to go from there?

Deeply involved in a conversation with a claymate, Susan began to subconsciously work the clay. She pressed into the clay with her fingers, thinning it, creating low pools and curving, intersecting ridges. Before she realized what she was doing, Susan had imparted this intriguing, undulating texture across half the entire pot. Discovering what she had done, she continued to work the clay continuing the organic pattern. When it was completed, (after letting it dry a month), she bisque fired it and then applied one of her homemade glazes before high firing it. The finished planter remains, to this day, on her patio, under a pergola. This one is dear to her. Despite many offers to buy it, she’ll never part with it.

You can order a custom pot inspired by this Susan Aach original Wave planter! 🙂

San Diego-based ceramic artist Susan Aach has a deep and reflective spiritual connection to her environment. Having grown up in Hawaii, Susan’s aesthetic is highly organic. This aesthetic is the inspiration for her many textures, derived from her personal experience with nature...read more >